Part two of a four-part series, in which we brought together writers from all 30 NHL teams to discuss a player from each one, who is their 'unheralded,' or one not getting the love or credit they deserve for their play this season.

Share All sharing options for: The Unheralded: Pacific Division

We then checked in with writers from each team in the Metropolitan Division.

This morning, we cut our East Coast Bias™ and we head out West, to the Pacific Division, where we've gathered another set of amazing writers to give us their selections of who on their teams are unheralded and deserve some love.

To kick off the Pacific division, we have Kid Ish, a semi-retired Ducks blogger who wrote at Anaheim Calling and Puq. It is rare when he writes, but one of those two locations would be where his work will appear.

While Ryan Getzlaf and Corey Perry are obvious the Anaheim Ducks "All Stars" another player is making his bid for recognition among fans. Rickard Lars Gunnar Roland Rakell, the 22-year-old center-turned-winger from Sweden, has made his case as the team’s unheralded all-star in the first half of the year. 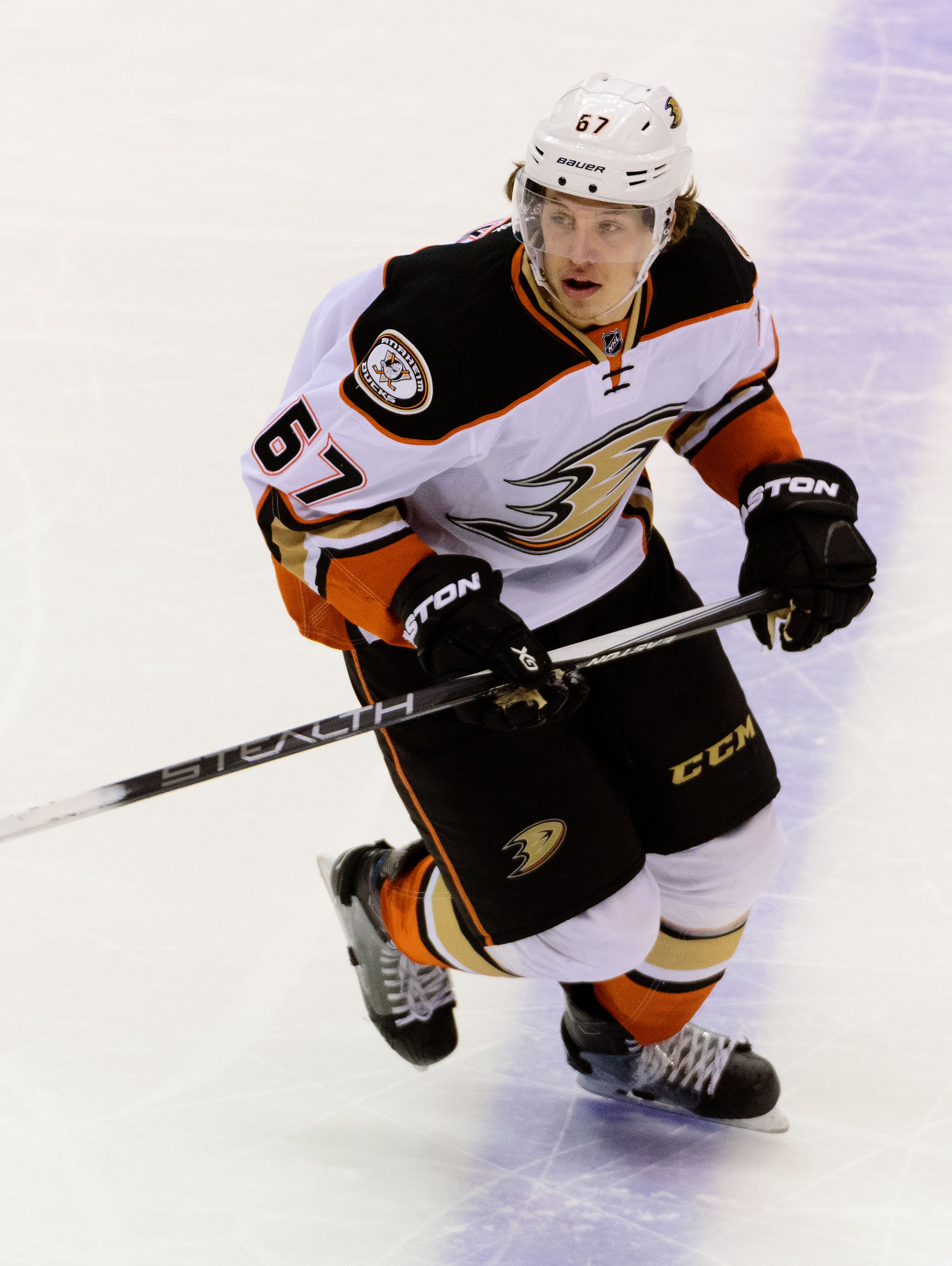 At the time of writing, Rickard Rakell leads the team with an even strength scoring rate of 1.7 points per 60 minutes of ice time. After an inspired but unproductive beginning to the season (2 goals and 1 assist through 11 games), Ricky returned from a brief injury stint as the top line left winger with Getzlaf and Perry. Since then, Rakell has been strong: 4 goals  and 7 assists through 26 games.

In addition to Rakell’s production, which outpaces Getzlaf and Perry in the same span of time, Ricky has shown he is capable of hanging with and, at times, carrying the top line. His on ice score adjusted corsi is around 57.6% at even strength, and his on ice score adjusted scoring chances and high danger chances sit at 60.2% and 63.9%, respectively.

This is Rakell’s first season as a regular player – imagining his play after he gets more experience is causing Anaheim fans joy despite a difficult season already.

Catherine Silverman, who works for the Arizona Coyotes as a coach in the Department of Hockey Development. Her work can be found on Today's Slapshot and InGoal Mag, and she helps out sometimes at the Nations Network. Her goal is to prove one day at a time that goalies aren't voodoo. 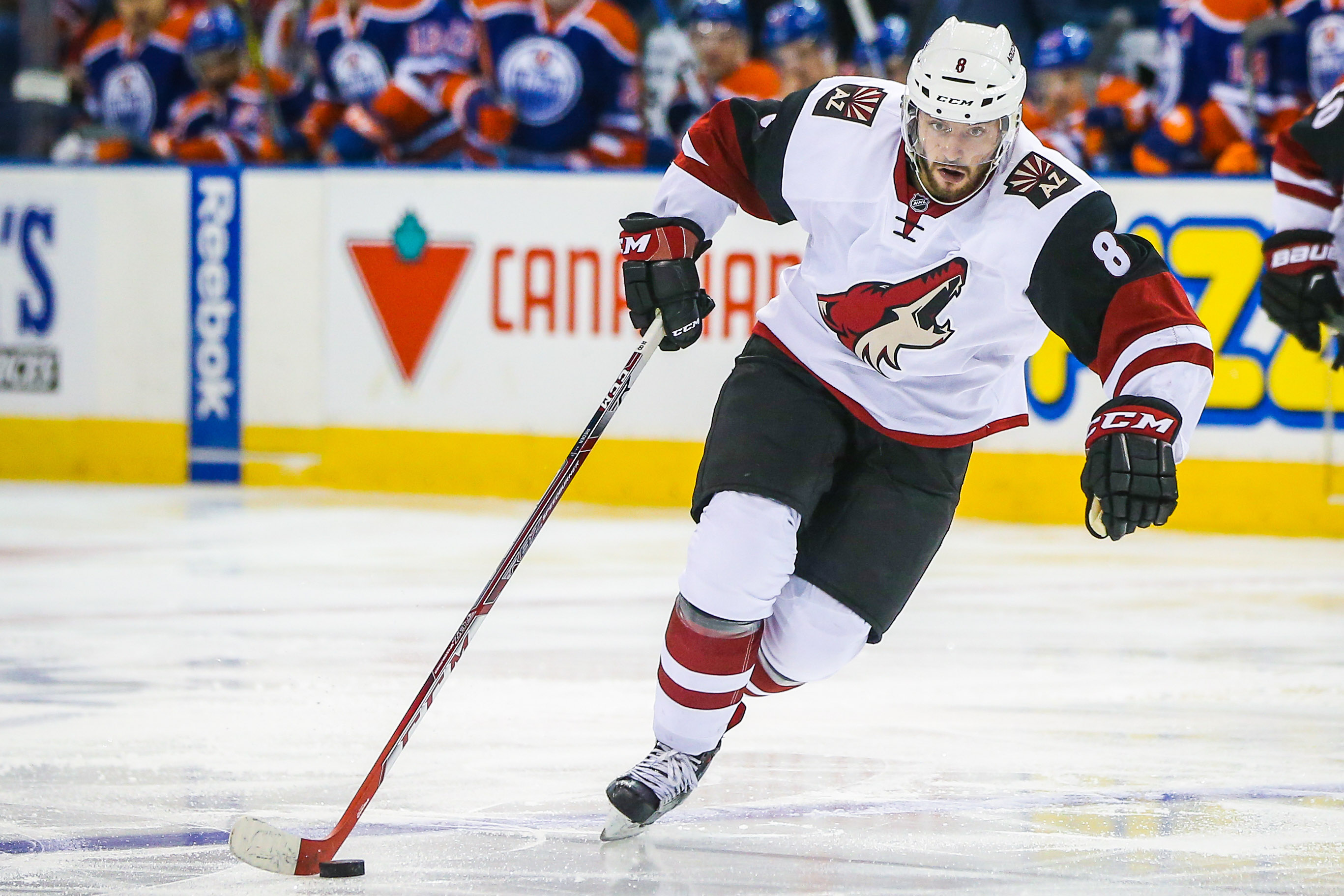 Rieder in open space against the Oilers, January 2016. (USA Today)
People always joke: Eastern bias makes it hard to remember the players on the Arizona Coyotes, and it's probably true. That's why Tobias Rieder is probably one of the most 'unheralded' players in the NHL; he's underrated on his own team, and he's on a team that's underrated in the first place.
With 127 Shots on Goal this season, Rieder is second in shooting to only Oliver Ekman-Larsson. He's shooting more frequently than Max Domi, Mikkel Boedker, Anthony Duclair, and Antoine Vermette - and it's paying off. He's fourth on the team in scoring, just one year removed from a rookie season in which he scored two short-handed tallies in under a minute. He's fast and defensively aware, good on the power play and the penalty kill, and can play either wing or centre. You may not know Tobias Rieder, but you should.

Mike FAIL, community manager and contributor for Flames Nation, former contributor to Matchsticks and Gasoline, and photoshopping internet dunker. His grandmother used to babysit Lanny McDonald too! He's also responsible for putting this together with me.

When I was a kid, watching hockey like every bozo child in Canada, I was constantly drawn to players who did more than just score goals. The first real taste of that was with Jere Lehtinen. He did little things so well that you may never have noticed. When he retired, that void was empty for awhile, until I clued in on Mikael Backlund.

Beyond the the glitz and glam of scoring goals, there are obvious and not so obvious things that can be important to on both ends of the ice. Examples of such include: Backlund making a Blue Jacket trip over a sweet zone entry which leads to a scoring chance. Or Mickis saying "Nope". To preventing a zone entry from going any further. And finally, how about this effort keeping the puck in play which leads to a 19-year-old Sam Bennett goal.

Examples like these just makes so much sense. They're honestly why I watch hockey now. The things I've showcased may be discussed after a goal or a huge play, but often they're forgotten during the ebb and flow of the game. Which is unfortunate, because they're chocolate chips in a box of chocolate chip cookies. They're the small moments that make up a really sweet experience.

This season, amid a dreadful Shooting Percentage% he's continued to make a difference on the team. Whether it's his On-ice Corsi For at 5v5 of 50.7% or his 52.5% scoring chances for. Or whether is t's unreal Shots For of 56.2%, he tends to be a positive impact wherever he plays. Even strength to the penalty kill it doesn't matter, the Flames can know he will likely do something like this to benefit the team rather than hinder them.

Hopefully he can score some goals soon so more Calgary fans can truly start appreciating what he does. I hope you take the time at some point to look for what he can do because he's really special.

Ryan Batty has been writing for Copper & Blue for almost five years, and someday he hopes to write about the team winning something other than the draft lottery. To fill the time between Oilers games, he likes to listen to the Grateful Dead. At last count, his collection of live shows totals more than 430 hours of music.

Who on the Oilers' roster would you consider unheralded or underrated? 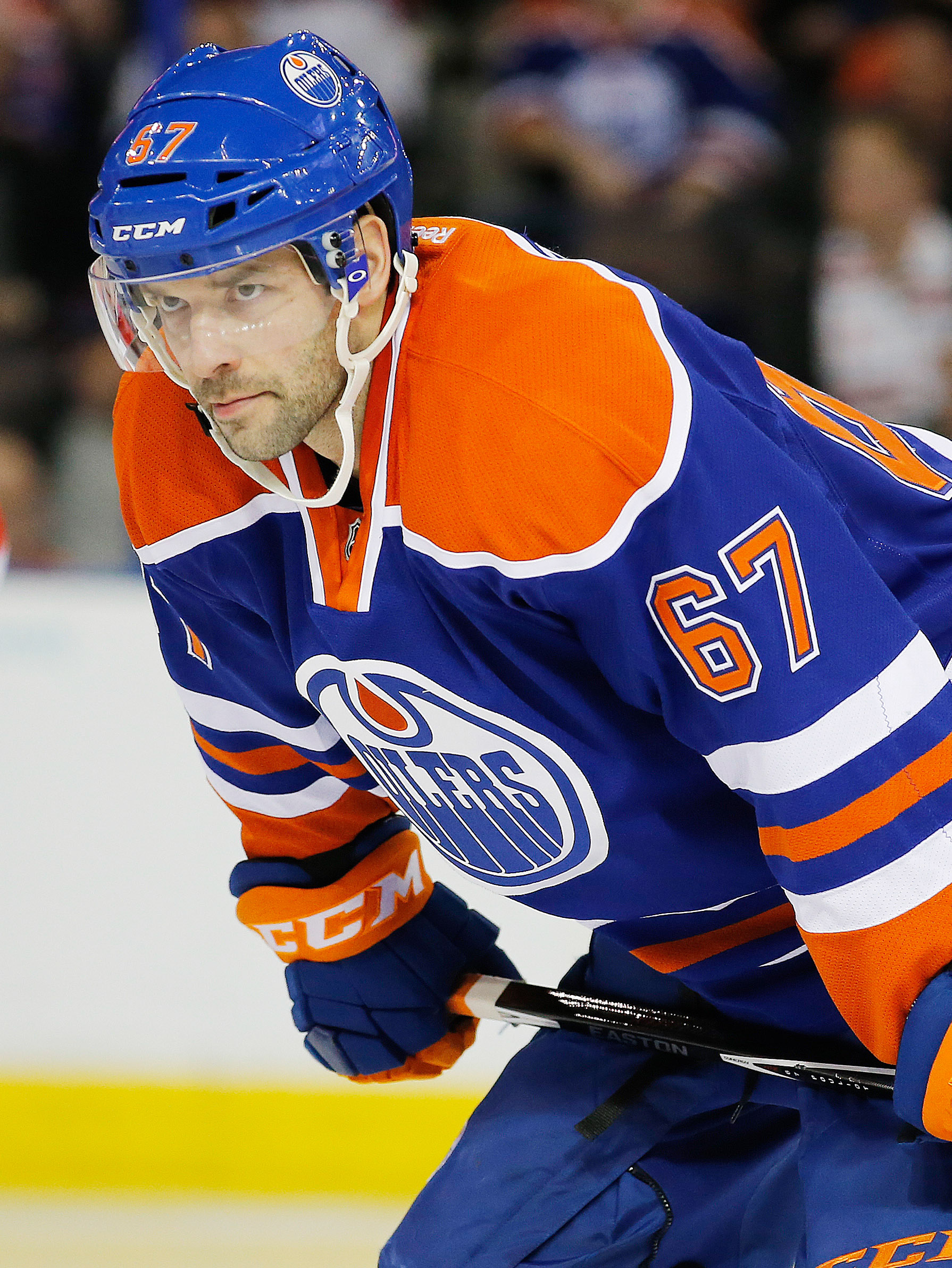 I almost answered Taylor Hall because I honestly don't think people understand just how good he is, but in the end I decided that it's a tough sell to list a former first overall draft pick as unheralded.

So instead I'll answer Benoit Pouliot. At even strength this season he's outscoring his most common linemates, a couple players you've probably heard a lot more about, Ryan Nugent-Hopkins and Jordan Eberle. And he's got strong possession numbers as well.

His Corsi For% is above breakeven this year and his numbers relative to his teammates show that he's doing a good job of keeping the puck moving in the direction when he's on the ice. He's proven to be one of the Oilers better free agent signings in a long time and yet you hear almost nothing about him, it's almost as as he's been lost in the shuffle in Edmonton behind all of the high draft picks.

A pudgy, unpopular Sheng Peng was 7 when he finally got into something hip: Wayne Gretzky and those fresh silver and black Kings unis. Still a bit pudgy but hopefully a little more popular, Sheng writes for Jewels from the Crown.

Just two months ago, Drew Doughty touted Nick Shore as "one of the best defensive centermen in the league." At the time, the second-year pivot had only played 58 total NHL games, so the praise seemed somewhat premature. But the noted Corsi non-convert was onto something: At the time, Shore, while playing third-line minutes, led all NHL centers in Corsi For %, Corsi Against/60, and Scoring Chances Against/60. So underrated no more, right?

Since then, Shore has been scratched in favor of Vincent Lecavalier, Jordan Nolan, and Andy Andreoff. Lecavalier, for better and worse, you know. Fourth-liners Nolan and Andreoff, you may not:

These are the very worst Kings in terms of Corsi For % Relative from 2012-16. Robyn Regehr and Rob Scuderi, you know too well as arguably the weakest play-drivers of our generation. Nolan and Andreoff, considering their deployment, are actually worse players.

Nick Shore skates with the puck against the Pittsburgh Penguins, December 2015. (USA Today)

And yet, perhaps because of a team-worst 5v5 shooting percentage when he’s on the ice (2.55%), along with a forwards-worst plus-minus (-9) and penalty differential (-7), Shore is getting beached. Darryl Sutter can be hard on youngsters like the sophomore Shore—famously, he sat Tanner Pearson for Nolan to start the 2014 Playoffs. This, of course, is the series where Los Angeles fell behind 3-0 to the San Jose Sharks, Nolan dressing the first two.

Sutter was able to figure it out in 2014, and I think he will with the 23-year-old pivot. As the Kings are currently constructed, Shore should reclaim his job as a 3C soon enough. More goals like this will help his cause!

Here to talk Bay Area Hockey is Jonathan Wold, the Sharks writer over at Today's Slapshot. He used to be a writer and managing editor at Fear The Fin, and he broadcasts hockey for San Jose State.

There are a couple options to choose from on the Sharks about who is most deserving of the underrated title. Tomas Hertl's possesion numbers have been dominant, but everyone already knows his name. My choice is 23-year-old winger Joonas Donskoi. He's just starting to get some attention in San Jose with 6 points in his last 5 games, but has been one of the Sharks' best players all year long. I wrote about him at Today's Slapshot right before that streak started. Donskoi has shown the ability to be a possesion driver on any line he plays on, has great hockey sense off the puck, and shows some very good creativity with it. Among players with 500 minutes of 5v5 play, he's 36th in the league with 1.98 points/60 minutes. He's sporting a 52.0 percent Corsi. These numbers aren't really inflated by sheltered zone starts or low quality competition, either. This guy is already a legitimate top six quality player. I see him as a consistent 50-60 point player as early as next season.

He broke down Joonas Donskoi's improvements over at Today's Slapshot.

Joining us for Canucks perspective is J.D. Burke, but you may or may not know him as the guy Canucks fans scream at on Reddit. He's the managing editor over at Canucks Army, where he is also yelled at. What a time to be alive. 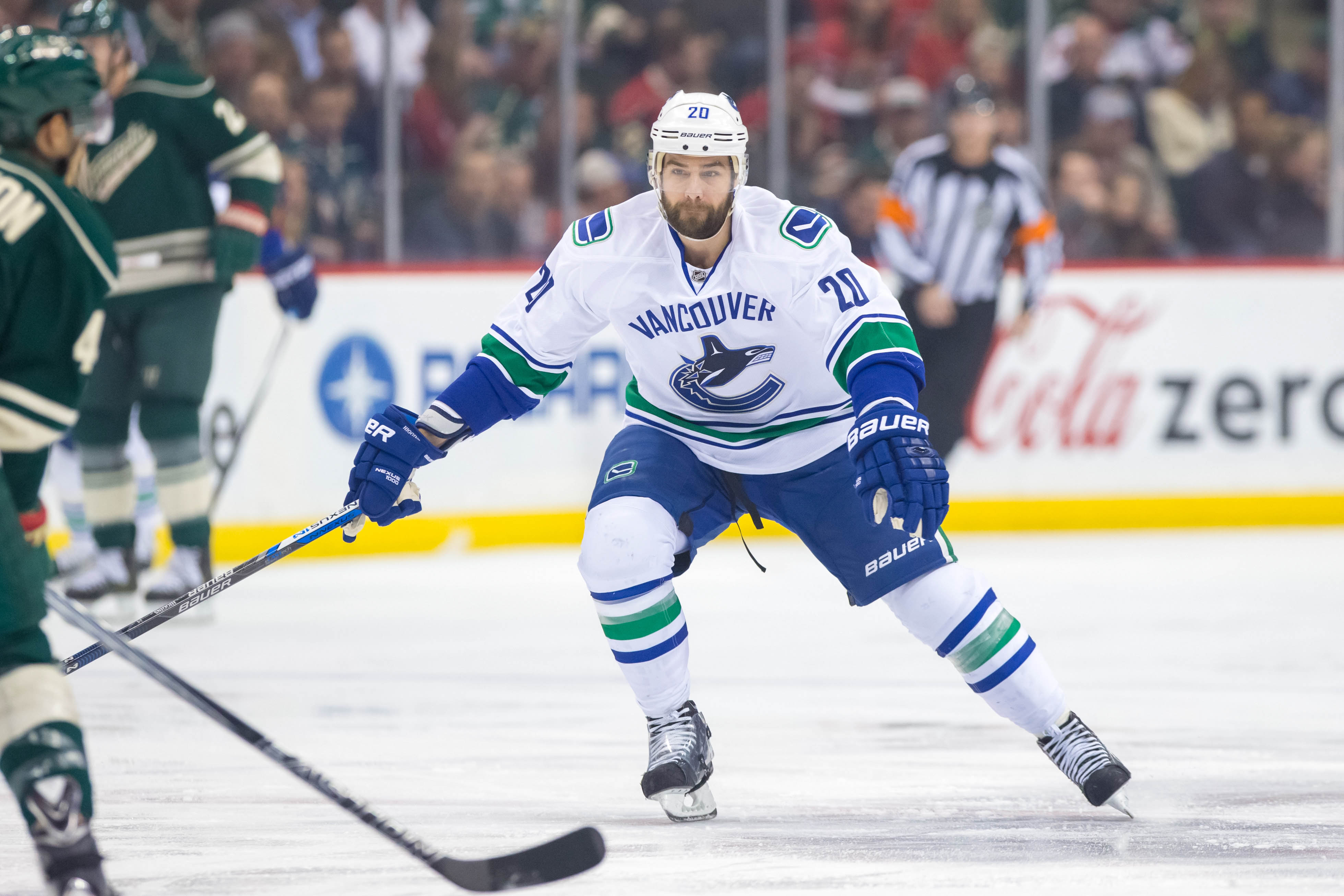 Chris Higgins skates towards the puck against the Minnesota Wild, November 2015. (USA Today)

Given all he's gone through of late, I'm going to have to lend my vote to Chris Higgins. First, the Canucks tried to trade him; then they waived him. It's all so silly. Higgins is very definitely one of the Canucks best twelve forwards. Of course, hockey is a goal scoring contest and Higgins has undeniably lost any and all finishing touch, which makes him a redundancy for most lineups.

All the same, his two-way game remains solvent and enough can not be made of the fact that Higgins has provided somewhere in the neighbourhood of 30 even strength points almost every season he's played in Vancouver. He deserves a much better fate than the Utica Comets, this much I am certain of.

Be sure to check in with us tomorrow, as we head back East to dive into the Atlantic Division.

Editor's note: Some stats listed may be outdated at the time of reading, as write-ups were submitted over the last 7 to 10 days.