The Penguins are potentially looking at a situation where trading Marc-Andre Fleury makes a lot of sense. Everyone loves trade ideas and potential trades, so here's one that I've cooked up.

Share All sharing options for: Thoughts on a Potential Marc-Andre Fleury Trade

First and foremost, I understand that trading Marc-Andre Fleury is going to be a very divisive talking point. He's a very popular player in Pittsburgh. He did not ask for a raise when renewing his contract. He's been the starting goaltender for this team for over a decade. That's a long time. I get it. But at the end of the day, it's a cruel business in the world of hockey and some ongoing circumstances may force the Penguins hand.

The upcoming expansion draft that we'll soon find out the rules on, Marc-Andre Fleury's limited no-trade clause, and the teams that need a starting goaltender make for a lot of variables and a lot of moving parts that complicate this process.

For me, it's basic economics in regard to the salary cap. Marc-Andre Fleury carries a $5.75M cap hit for the next three seasons. Matt Murray only brings $620,000 cap hit next season before he will need re-signed as a Restricted Free Agent. Yes, there may be valid concerns of a small sample size at the NHL level for Matt Murray, but for the price, as far as I am concerned, his level of play will be consistently average enough for this Penguins team, who only need the goalie to be average. As long as Sidney Crosby, Evgeni Malkin, Phil Kessel, and Kris Letang are the big horses for this team, Murray is all that they need, essentially. 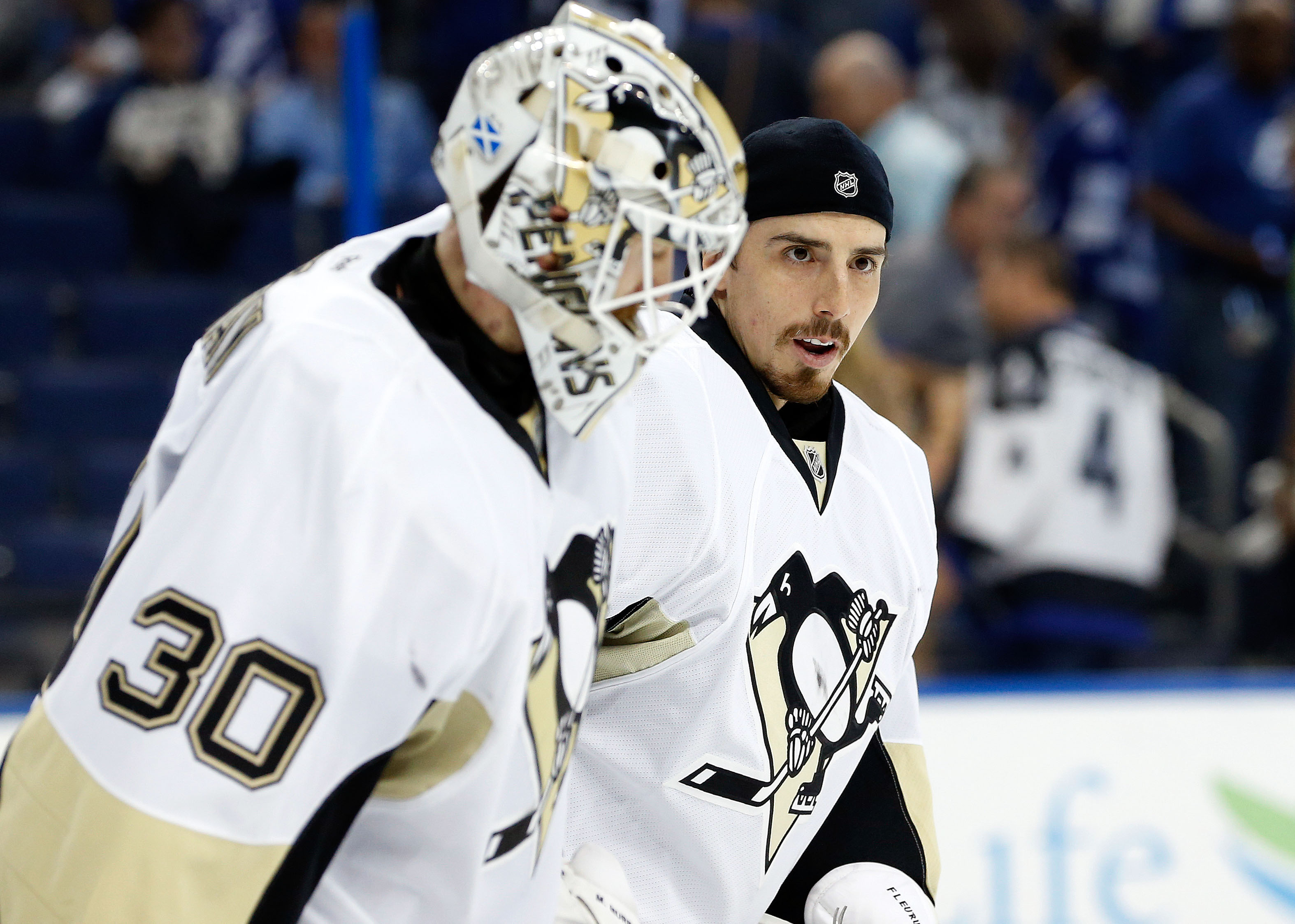 Factor in the economic aspect and it might be an easy enough decision. The expansion draft factor is the final thing we needed to know in order to make this decision. We don't know the full set of rules for expansion yet, but it's believed that players who have a No-Movement Clause as part of their contract will be required to be protected from the draft by their team.

If Marc-Andre Fleury and Matt Murray are both still on the roster next summer when the expansion draft takes place (and these rules end up being the case), this would force the Penguins to protect Fleury and leave Murray exposed to be selected. Plain and simple, this just isn't going to happen. The Penguins would certainly make a move before then. Even if they were able to get Fleury to waive his NMC and be exposed in the draft, you would risk losing him for nothing. That would be atrocious asset management.

We know that there aren't a lot of teams that need a starting goaltender and have the room under the salary cap for the $5.75M cap hit he brings to the table.

So, who are the potential suitors? Off the top of my head, the two that tend to make the most sense are the Calgary Flames and the Toronto Maple Leafs.

If the trade comes together and is a possibility next weekend at the draft, and I'm Jim Rutherford, I make the deal.

Let's talk about Calgary first. If Calgary is going to take Fleury's contract, they're going to want to shed some salary back. I would expect them try and move Dennis Wideman and his $5.25M cap hit or Matt Stajan and his $3.125M cap hit. The Penguins should not want either of these players, nor do they need those cap hits on the books. If Calgary could make a Wideman move elsewhere, I think they would be willing to make the move for Fleury, and I would be content with a simple return, such as their 2nd round pick in the upcoming draft (#35 overall). They may be willing to swap Fleury for Michael Frolik, but hard pass. His 4.3M cap hit for the next four years would almost certainly underwhelm over the term of the contract. Good depth player, but not at that price.

Now, moving Fleury to Toronto is where it gets more interesting as well as more intriguing. I think there is a deal to be had here. The Penguins and the Maple Leafs have had a trading history recently, having struck a deal in the Daniel Winnik trade at the deadline in February of 2015, and of course, last summer with the blockbuster trade for Phil Kessel. The Maple Leafs will have the cap space if they move out a player, and have the assets to put into the deal. They have an abundance of draft picks they can move, as well as an abundance of prospects who have become expendable with their drafting of better prospects.

My proposed trade for Fleury

The Penguins would see a minor cap relief, with 1.6M in savings between Bernier and Fleury. Half of this savings would be eaten up by Gauthier, but he also is flexible from the standpoint that he can still be sent to the AHL without needing to clear waivers.

The reason that I believe this deal can be worked out and is realistic, is primarily due to Toronto's prospect depth. 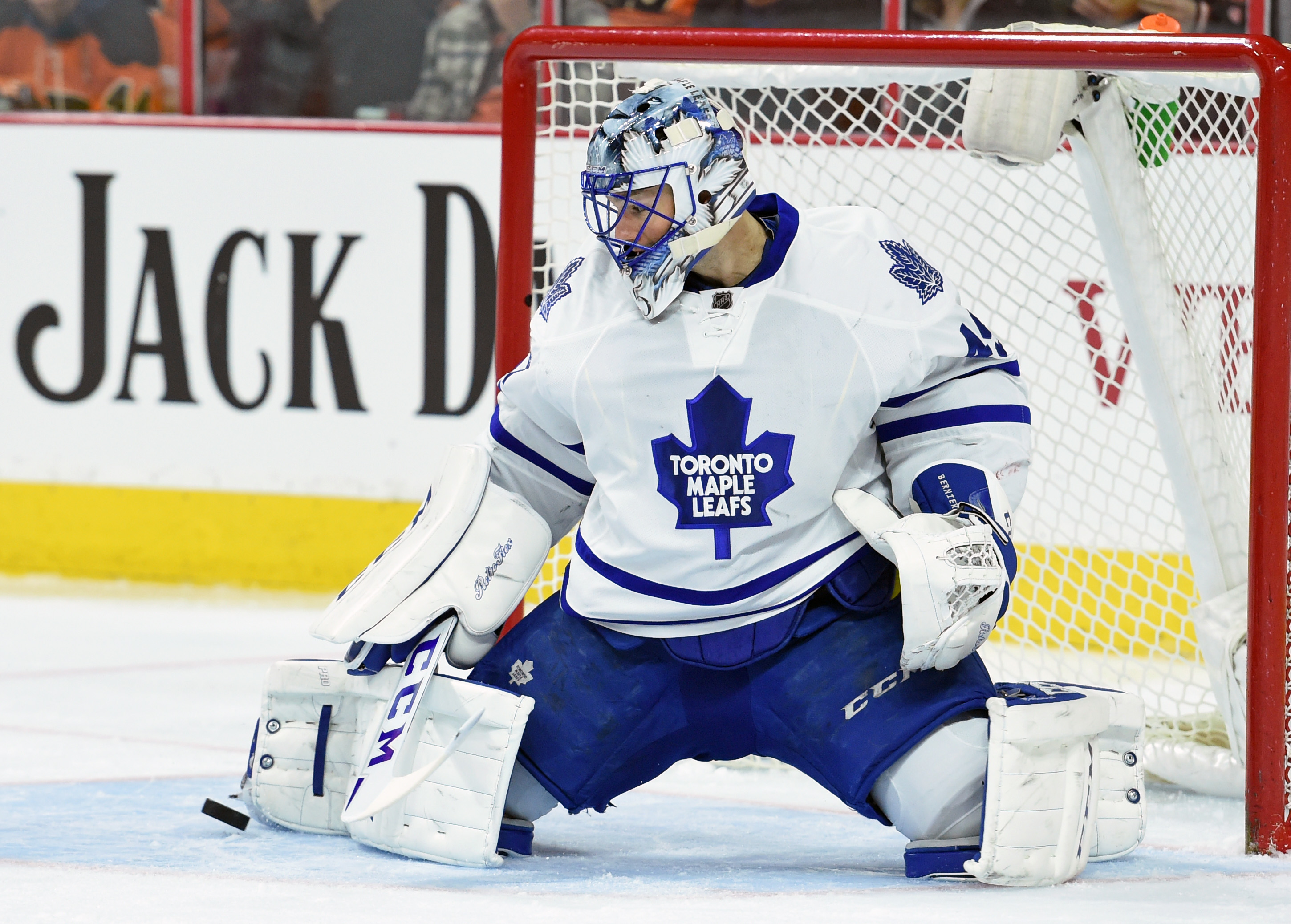 Jonathan Bernier makes a save against the Philadelphia Flyers, April 2016. (USA Today)

The Maple Leafs get a clear cut starter who can play 60 games. While the goaltender position would be seeing an increase in cap hit, he would be controlled at that cost for the next three seasons.

The Penguins, in Jonathan Bernier, get a legitimate backup, who is under contract for 2016-17 and then will be an Unrestricted Free Agent. In a perfect world, that one year would be enough time for Tristan Jarry to start regularly in Wilkes-Barre.

Both goaltenders here, shown with rolling 25-game averages dating back to the beginning of the 2010-11, have had some swings up and down. Bernier was atrocious last season, but a change of scenery and a new goalie coach in Mike Bales could do some good for him. I believe he would be a great backup in that situation, and would be capable of a stretch as a starter should he be needed in the event of injury.

Frederik Gauthier could be useful for the Penguins, He's young and built big. He potentially could be a good and cheap bottom-six center for the Penguins. I believe he is and could be expendable to the Maple Leafs due to their center depth of Auston Matthews and Nazem Kadri, and this could be even strengthened if they are able sign Steven Stamkos on July 1st.

If the Maple Leafs aren't willing to deal Gauthier, I would present an alternate case of trading Bernier along with one of the Leafs 2nd round picks, even if it ended up being #57 overall.

The Dallas Stars could also make a move similar to the situation that the Maple Leafs are in. If Dallas were willing to swap goaltenders, sending Antti Niemi to Pittsburgh, the Penguins would see minor savings, of a little over $1M in the short term of two years, saving one year of term. For me, it would all come down to what the Stars were willing to sweeten the pot with. My guess would be a prospect more than a pick, as Dallas doesn't have the picks in the range of return I would expect (2nd round). I think we'd be looking at something like a depth center in Mattias Janmark.

I don't know. Maybe. I've crowdsourced a few Maple Leafs fans whose opinions I respect on this and their answers are basically "I think I see it working" even aside from whether or not they would make the deal.

If the trade comes together and is a possibility next weekend at the draft, and I'm Jim Rutherford, I make the deal.