After being the chief return piece in a deal trading Brandon Sutter to Vancouver in summer 2015, the depth chart had a hole at the 3rd line center spot and Bonino (coming off 49 and 39 point seasons their prior 2 years) was going to be counted on to fill it.

In the afterglow of the Stanley Cup, and a Cup run where he led the team in assists no less, it might be tough to remember the struggles of Bonino's regular season. Through 40 games he had just 3 goals and 7 assists on the season when he broke his hand blocking a shot in mid-January which would keep him out 6 weeks until late February.

But then, once Malkin got hurt and HBK line was put on the scene, boom, his whole season turned around. Bonino scored 18 points in the last 21 regular season games and largely kept that production up in the playoffs. With some of the most iconic moments of the Pens playoff run: like the series-winning OT Game 6 goal against the Capitals or a 1G+1A night the only time the Pens face elimination G6 vs. the Lightning. Or the GWG scored late in G1 of the SCF against the Sharks. Bonino ended up shining as bright as anyone on the team

The future in Pittsburgh could be limited to this next season for Bonino, considering the Penguins (as usual) won't have a ton of cap space* and Bonino could be in a for a big raise considering the money on the open market for comparable players like Troy Brouwer (4 years, $4.5 million per), David Backes (5 years, $6 million) and Frans Nielson (6 years, $5.2 million). Bonino has scored 36 points in hiss last 45 games (reg season + playoff) and if he can produce points anywhere close to that next season.

*According to General Fanager the Pens have $56.3 million tied to just 13 players for 2017-18, though this includes Marc-Andre Fleury, so it might be $50.55m for 12. And they will have to re-sign Brian Dumoulin and Matt Murray.

How long the Pens intend to keep their best 3 players on 3 separate lines could be a major difference for Bonino and the team as well. Bonino produced like a bottom-6 player when he had bottom-6 linemates, and then he probably got the best combo of wingers on the whole team in Hagelin+Kessel.

Mainly used starting in the d-zone, to save Sidney Crosby and Evgeni Malkin for the o-zone starts.

(From Own The Puck) 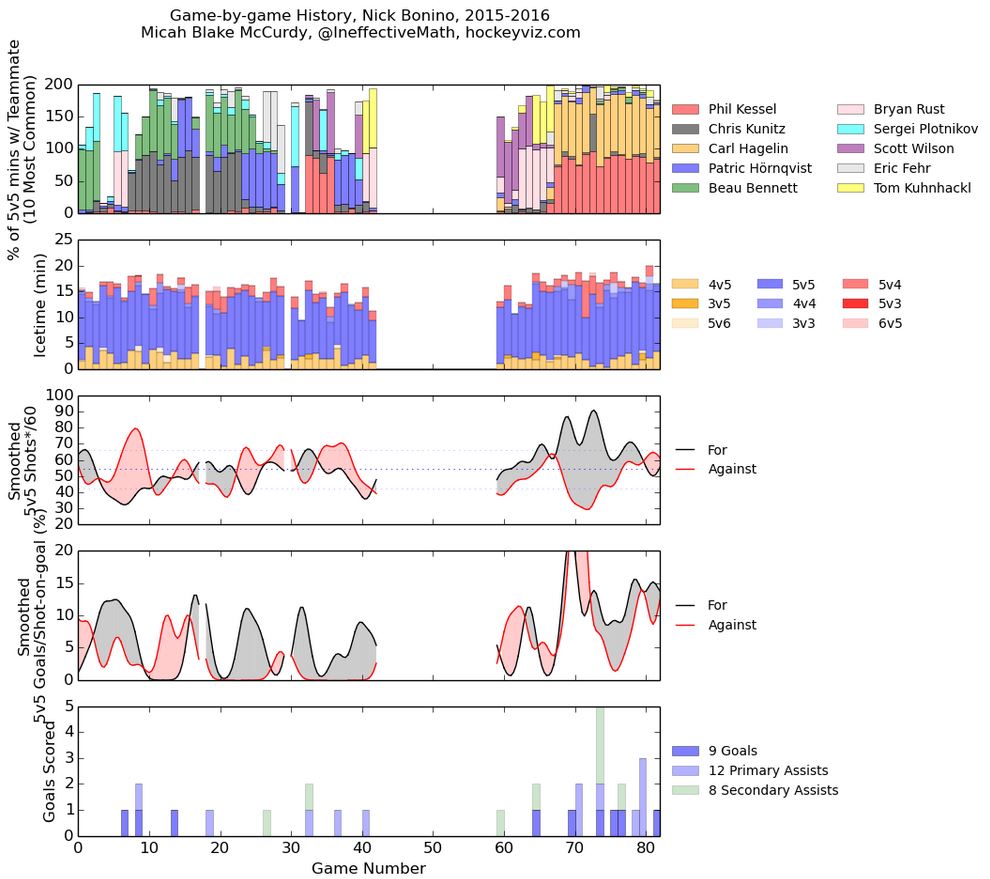 Bonino's most common forward linemate on the ice at 5v5 time was Phil Kessel, but the two were only together for 209 of Bonino's 746 minutes. He played 95+ minutes with 5 other forwards (Chris Kunitz, Carl Hagelin, Patric Hornqvist, Beau Bennett and Bryan Rust).

Distribution of Teammates and Competition 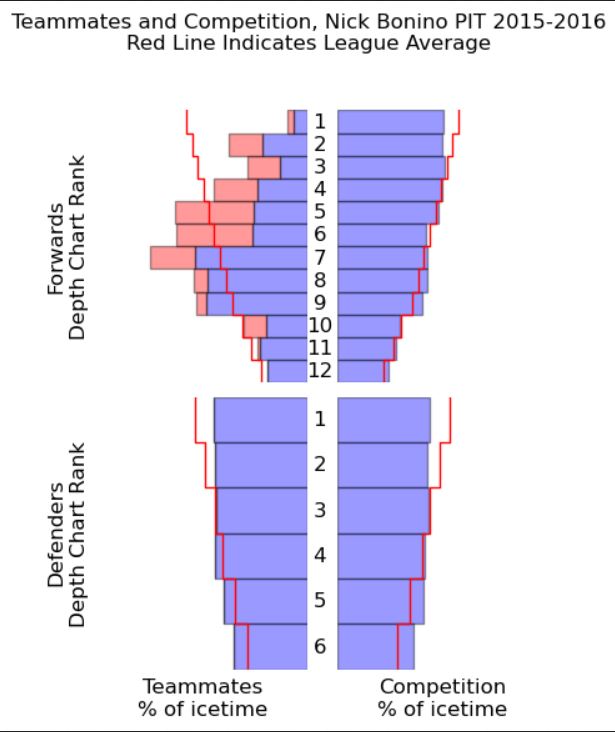 GIFs of the Year

Beat the Caps do it

Probably the favorite goal in Darnay's life. What a pass by Kris Letang too. This won Game 1.

Just guys being dudes with Hagelin giving his 2 best buds some literal pats on the back after another great game.

Yeah, got to do it

Here's the call to the goal that won the series for the @Penguins! #HockeyNightPunjabi pic.twitter.com/uwGjbUQ9Nu

Feel free to vote in the poll below to rate Nick Bonino's season. Vote based on your expectations coming into the season, with 1 being the lowest and 10 being the highest.