Olli Maatta is a very polarizing player among Penguins fans, perhaps second in that category only to Marc-Andre Fleury.

Thanks to a postseason mini-renaissance, Olli seems to be back in many fans' good graces. During most of this season, however, there was (and still is) a seemingly large contingent of Pens fans were ready to trade him or leave him exposed to Vegas in the expansion draft. He's too slow! He doesn't fit Sullivan's system! Other teams have figured out how to take advantage of him!

For whatever the reason, Maatta's game seemed to be on the decline since the trifecta of cancer, shoulder surgery, and being checked into a bench door in the 2nd and 3rd years of his career (I mean, whose career wouldn't be on the decline after that?). His numbers have been on the decline too, the fancy ones and the "regular" ones, leading some to think that his early promise had been a mirage and it was time for the Pens to cut ties while he still had some perceived trade value.

We can see this year over year decline in Maatta's individual stats since he broke in as a 19 year old rookie.

Note: All the data below is for 5v5 play and comes from corsica.hockey. For defensive pairings, only pairs with at least 50 minutes TOI were included.


But hockey is the ultimate team sport, so it can be misleading to look at individual player's performance in a vacuum. To that end, looking at the context of Maatta's struggles, in the form of teammate and deployment, can shed some light on them and on what the Pens should do with him moving forward. 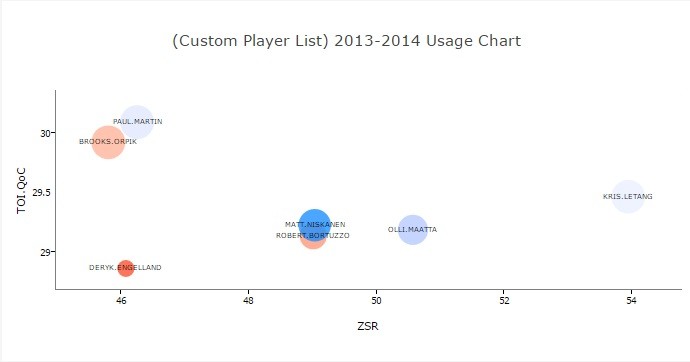 In his rookie year, Maatta spent most of his time paired with Matt Niskanen and they were very good together with a 53.29% Corsi. They also got fairly favorable deployment. Orpik and Martin were used as the "shut down" pair, which allowed the other pairs to get the better matchups and zone starts. All in all, none of this is too surprising for a promising rookie just getting started in the league. Maatta got a good partner in Niskanen (who had a 53.2 CF% for the year) and was used judiciously with a fairly balanced deployment. 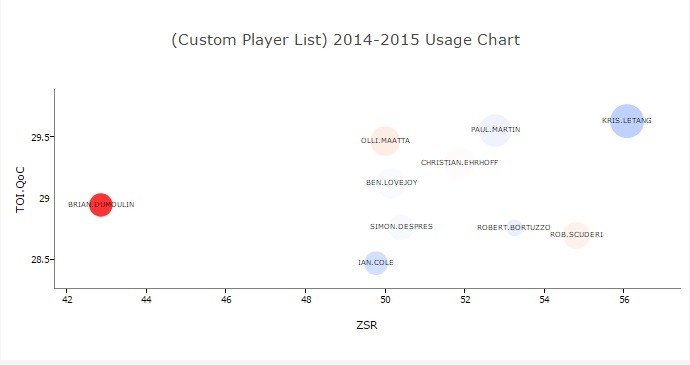 Year 2 for Maatta was interrupted by cancer and then cut short by a second shoulder surgery. In the limited time he was healthy, he played with Christian Ehrhoff and Kris Letang. He and Ehrhoff struggled, but the pairing with Letang was dominant. First year coach Mike Johnston clearly trusted Maatta and Letang as they (along with Paul Martin) faced the toughest competition from the opponent each night.

And, again, Maatta's zone starts were fairly balanced. All in all, Johnston did a pretty good job of balancing zone starts and picking the right matchups for his defensive pairs and everyone seemed to benefit, except for poor Brian Dumoulin, who only played 8 games and had a pretty rough go of it.

Ok, things get a little trickier here because we need to try to separate the data for play under Sullivan from the data from under Johnston.

But first, here's his pairing data for the whole year:

Maatta spent most of the year playing with Letang and, oh look, they were dominant again. Playing with other D-men? Not as good. The numbers with Warsofsky are good, but that's a small sample size.

But let's take a moment to examine the role the coaching change plays here.

Before Johnston was fired, Maatta's individual CF% was 46.73. That's not good. And he was getting the best zone starts on the team. His ZSR (zone starts ratio) was 59.17. So on one of those bubble plots seen above, he'd be way to the right. Letang was also getting favorable zone starts (55.06 ZSR) and his CF% was 49.35. Yes, even Kris freakin' Letang was a negative possession player in Johnston's second year.

Obviously, Sullivan taking over changed some things. Maatta's individual CF% jumped to 54.43 for the remainder of the season even as his ZSR fell to 53.96. Daley and Cole were getting the more favorable zone starts at 55.07 and 54.04 respectively. But it really didn't even matter. The Maatta-Letang pairing was dominant, and in the limited amount of time he spent with Daley, he struggled.

So that takes us to this year, where Maatta was a positive possession player with everybody except Trevor Daley. Maybe the more interesting item, however, is his deployment. Maatta-Daley got a higher ratio of defensive zone starts than the other pairings without the benefit of playing against the weakest competition, which went to Cole-Schultz. I can't say they were used strictly as a "shut down" pair, because Dumoulin-Letang got the tougher competition, but Sullivan certainly wasn't doing them any favors with their zone starts.

And the proof is in the pudding, as they say. Of all Penguins defensive pairings to play more than 100 minutes together at even strength, Maatta-Daley were the worst with a 46.06 CF%.


Conclusions and What to Do Next

So, yes Maatta's numbers this year were not good. But context is important: he got the worst zone starts (when compared to his teammates) and the worst regular partner of his career (Trevor Daley's individual CF% of 46.47 is worst on the team among defense-men).

All of this data also reveals something else: Maatta is not a #1 guy. He's not Kris Letang. He can't drive play at elite levels, carry a pairing all on his own, and make bad possession players serviceable. And that's OK. He's not being paid to be that guy. Defensemen with cap hits comparable to Maatta's $4.08 million are guys like Jake Gardiner, Cam Fowler, Alexei Emelin, Alec Martinez, and Niklas Hjalmarsson. None of those guys is a true #1 defenseman. Some aren't even the clear #2 on their teams. But they all have one thing in common: they spend most of their time paired with other good defensemen. In 2016-2017, the most common partners for the aforementioned players were Carrick, Vatanen, Weber, Muzzin, and Keith, respectively.

And Maatta is a guy who plays great when given a good partner. The numbers bear that out. He's done his best work with Niskanen and Letang. In both cases, the pairing wasn't just average; they excelled.

And further proof of that can be seen in his limited work with Schultz this year. Together, they posted a 56.2 CF% in about 65 minutes of ice time during the regular season; that's really good and it bears giving them an extended look.

So at this point the path forward should be fairly clear: if the Penguins want to get the most out of the beleaguered 22 year old they've invested so much faith and money in, they need to give him a better partner. I say play him with Letang and watch them dominate as they have in the past. Worried about breaking up the Dumoulin-Letang pairing? Don't be. Just play Dumo with Schultz. In 254 5v5 minutes this year, they posted a 52.12 CF%. That's darn good in it's own right and the sample is big enough to show it's no fluke.

Ideally, Trevor Daley is not re-signed this off-season. If Cole is still with the team, he should be the #5 defenseman and spots 6 through 8 can be filled with players already in the organization or with inexpensive free agents if need be.

Either way, the team should be set with a very capable top-4 and Maatta should return to form, so long as they don't tie another boat anchor around his neck and expect him, and his numbers, to stay afloat.